skip to main | skip to sidebar

By Don DeCaro, Senior Instructor and Consultant.
At a fossil power generating station, it was now lunchtime and all was well. The electrical crew, those who run electrical conduit throughout “gen stations,” were having a well-deserved lunch break. The supervisor was with them and all were relaxed and chatting about whatever gets discussed at lunchtime.

At about this time, I was in the Maintenance Manager’s office discussing either up-coming safety training or the results of air-borne monitoring that was just recently completed. On the Manager’s desk was a radio turned of to keep abreast of what was happening in the “field.”

“We’re coming in, we’re coming in!” was heard, very loud and clear. The excited voice from the General Watch Supervisor (GWS) was now stating that they were coming to a site near us. Other words were now heard sporadically: burn, bad, electrical burn, etc. We both left the office and headed to the expected arrival site. I ended up having a container of “Water Jel” with me; to this day I do not clearly remember how I got it.

We arrived just as these two employees did; they both looked like they had a bad sunburn around their faces. The GWS held up the Electrical Supervisor’s arm. The forearm was split wide open, looking like a hotdog on a grill that had been on a bit too long. His bone and tendons were clearing showing, and that was because there was no blood evident. The electrical arc apparently cauterized the site perfectly.

The Electrical Supervisor was in shock and showed no evidence of pain. As he held his arm up, I opened up the container of Water Jel and took out the small towel-like fabric that was completely covered in gel. I completely covered the hand and arm with this. Just at this time the EMTs arrived and took over.

Later that day did we understand what had happened. The GWS wanted some technical advice from the Electrical Foreman about some electrical equipment (440 amps). The Forman pointed in and got too close. An arc went into his wrist and exited at the elbow.

The injured person eventually recovered with minimal damage. The arm healed with only some scar tissue showing and with some minor damage to the tendons.

A detailed review of the incident revealed deficiencies of their actions/procedures not followed, were corrected and communicated to all relevant personnel.

Yes, he was having lunch and figured it would only take a moment to help this person out and then get back to his lunch. The arc took less then that moment. 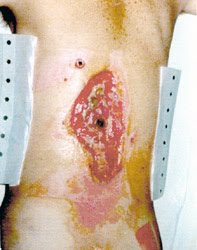 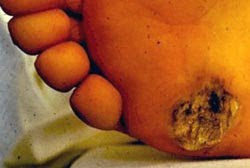 Exit Wound: Current flows through the body from the entrance point, until finally exiting where the body is closest to the ground. This foot suffered massive internal injuries, which weren't readily visible, and had to be amputated a few days later.

Arc Burn: This man was near a power box when an electrical explosion 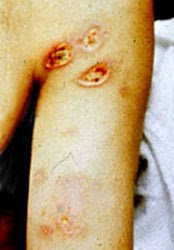 occurred. Though he did not touch the box, electricity arced through the air and entered his body. The current was drawn to his armpits because perspiration is very conductive.
Posted by American Safety Consultants, LLC at 10:31 AM